Under the Microscope with Peter Buchwald, PH.D.

Drug discovery has truly transformed the field of medicine over the last century. Millions have benefited from the introduction of novel drugs such as antibiotics, glucocorticoids, antipsychotics, contraceptives, antihistamines, and many others that have revolutionized the treatment of several serious as well as lethal diseases. Even the transplantation of organs and cells became feasible only after the introduction of improved immune suppressants.

Currently, type 1 diabetes is the only autoimmune disease that has no approved immune therapy – something that the DRI is aiming to change. Dr. Peter Buchwald, director of drug discovery, has been leading the DRI’s efforts to design and develop safer and more effective agents for immune-related therapies. His research, in collaboration with several other Institute scientists, is yielding some exciting possibilities for those living with diabetes. 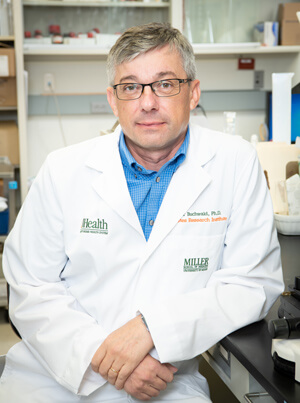 What are you working to achieve in your area of research?

For several years now, we have been working to develop a Drug Discovery program that focuses specifically on immunomodulatory areas of interest for type 1 diabetes. Ultimately, our goal is to achieve improved immune therapies for islet transplant recipients on one hand, and prevention of onset in those who are likely to develop the diseases – and possibly even reversal in new onset patients, on the other. When we started, there was essentially no medicinal chemistry expertise at DRI or even at the University of Miami; hence, it took a while to build it up from the ground and acquire funding. Fortunately, due to interest from many people, including from Drs. Ricordi and Kenyon here at the DRI, we are now approaching a critical mass for drug discovery oriented work here on the medical campus.

Can you explain some of drug discovery projects now underway?

Our work is focused on three main areas. The first is the modulation of co-signaling interactions that act as immune checkpoints. Immune checkpoints are regulatory pathways critical for immune regulation and self-tolerance: they play crucial roles in helping the immune system mount an attack against invading foreign organisms, but prevent it from destroying all cells indiscriminately. A too weak response can allow proliferation of pathogens and possibly even cancerous cells, whereas a strong and non-targeted activation can lead to self-reactive responses that destroy normal cells causing autoimmune diseases. Different molecules that participate in these signaling responses can be stimulatory or inhibitory.

We have been focusing on a molecular pathway known as CD40–CD40L interaction, because blocking this pathway was found to be particularly effective in islet transplant recipients. With financial support first from the Diabetes Research Institute Foundation and then from an NIH grant, we were able to identify and synthesize the first promising small molecule inhibitors and are now conducting additional experiments to confirm and then improve their activity. More recently, I also became very interested in the modulation of another immune checkpoint pathway, namely PD1–PD-L1 because of its incredible success in revolutionizing cancer therapies, and because its inhibition has been now found to cause a sudden occurrence of diabetes as a side effect in certain patients.

A second major area is in achieving local immune suppression and anti-inflammatory (LISAI) effects. This can provide improved islet survival and function, while minimizing the side effects of systemic immune therapies by focusing them at the site of transplantation and reducing their dose. This is particularly relevant for the Sustain pillar of the BioHub strategy, in which we are investigating ways to protect transplanted islets in a well-defined space where they are easier to target. This work involves close collaboration with other DRI colleagues and in particular the islet immunoengineering group led by Dr. Alice Tomei, and we have just received a two-year grant from JDRF to support exploration of novel nanomaterials toward this goal.

Finally, a third area of my work involves quantitative and computational modeling in general. As part of it, I am focusing on the study of islet function and of its change during diabetes onset or following transplantation. An important portion of this work has been supported by the NIH as part of our islet physiomimetic device project within the Human Islet Research Network (HIRN) consortia.

We are also collaborating with Drs. Midhat Abdulreda and Per-Olof Berggren to use their unique eye-transplant model for visualization and sample collection. As part of this project, we recently were able to visualize the autoimmune destruction of islets in diabetic mice and develop a model that can predict the onset of diabetes based on early visual signs of inflammation that can be measured noninvasively in such islets.

Why is the drug discovery area important for cell-based therapies/islet transplantation?

Islet cell-based therapies need to overcome several major hurdles, including the considerable loss of functional islets after transplantation due to inflammation followed by limited oxygen availability until revascularization occurs. There is also a prolonged need for immune suppression to avoid immune destruction, and new improved immunomodulatory drugs could provide safer and more effective treatments. A successful LISAI regimen could help with both: minimize the early inflammatory response and reduce the need for systemic immunosuppression.

What makes this work so exciting?

The incidence of autoimmune diseases, including type 1 diabetes, is increasing at alarming rates in industrialized nations, and there is a very good chance that drug discovery can provide real breakthroughs here in the near future. Our ultimate goal is to eliminate such diseases from being a life-long threat just as we were able to do so for bacterial infections with the introduction of antibiotics in the late 1940s.