Site - Engineering a home for islets

Islet transplantation has clearly shown the ability to restore natural insulin production and normalize blood sugar levels in people with type 1 diabetes. But, some hurdles remain before this cell replacement therapy can be offered more broadly to those who can benefit. Two notable ones are the complex challenges of the immune system and the shortage of insulin-producing cells available for transplant.

Currently, islets used for transplantation come from the pancreases of deceased donors. With organ donation in the United States at critically low levels, there are clearly not enough cells for everyone. The DRI is pioneeering several strategies to create a reliable supply of insulin-producing cells.

Can We Use the Entire Pancreas?

Scientists have discovered that different types of cells within the non-insulin producing portion of the pancreas, which makes up 98 percent of the organ, have the ability to become insulin-producing cells. In particular, they have focused on a unique population of stem cells that remain intact after the autoimmune attack in a large percentage of patients. The DRI’s Cell Supply team has been developing methods to stimulate these pancreatic stem cells to turn into insulin-producing cells with very promising results.

Using a naturally occurring protein called bone morphogenetic protein 7 (BMP-7), DRI reseachers demonstrated that these stem cells within the non-endocrine tissue can become new islets when cultured in the lab. Their pioneering findings using this FDA-approved molecule were published in the journal Diabetes. In itself, the discovery could potentially open the door to transplanting multiple patients from a single donor pancreas, but the results have other promising implications. 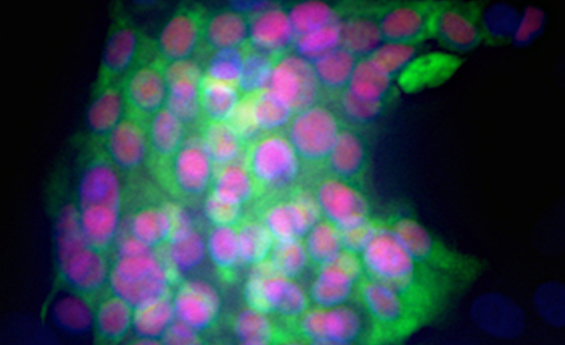 After observing that these stem cells remained in the pancreas after the onset of autoimmunity, the researchers further investigated the possibility that patients could regenerate their own beta cells if given the molecule BMP-7. Testing their theory in experimental models, the researchers observed that the recipient pancreas was “teeming with new insulin-producing cells” and that blood sugar levels dropped significantly after just three weeks of treatment. The team is now extensively testing this islet regeneration strategy with the goal of translating the approach to clinical trials. After researchers can restore self-tolerance and halt autoimmunity, which the DRI is pursuing in earnest, this novel method of cell regeneration may eliminate the need to transplant donor islets and address the challenge of foreign tissue rejection.

The issue of safety in stem cell research is of paramount importance, particularly since several strategies being explored throughout the field result in a population of cells that are not entirely islets. Additionally, in this process there are some cells that do not completely develop along the desired path and have been shown to form tumors (teratomas) in preclinical testing. The risk of teratomas remains the biggest obstacle for the clinical use of human pluripotent stem cell (hPSc)-based therapies.

To address this problem, DRI researchers set out to engineer hPSc with “suicide genes” that will be activated in (1) any cell that is not a beta cell; and/or (2) any cell that may form a tumor. When researchers have activated these “suicide genes” in the cells that would be used for transplant, they have been able to create a safe and virtually pure population of insulin-producing cells. The researchers are now further investigating this significant discovery with the goal of translating it to patients with type 1 diabetes.

DRI scientists have discovered that a clinically approved agent, BMP-7, can stimulate the growth of new islets from pancreatic stem cells. Now the team has discovered where these cells reside in the human pancreas. This is the first evidence that these stem cells can be stimulated to create new beta cells in a living organism, which may open the door to successful islet regeneration strategies in patients.

A big step forward with reprogramming cells to make islets