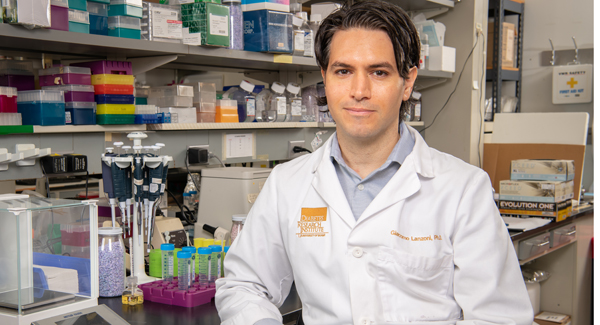 “I don’t just imagine that a stem cell therapy could impact the life of patients with diabetes – I am sure it will, and I put my passion into making it a reality.”

Dr. Giacomo Lanzoni is Research Assistant Professor at the Diabetes Research Institute at the University of Miami Miller School of Medicine. For more than a decade, Dr. Lanzoni’s area of focus has been in developing stem cell-based approaches toward the cure of type 1 diabetes.

Since coming to the University of Miami from Italy, Dr. Lanzoni has been collaborating with other DRI investigators on several key projects, including the use of biliary tree stem cells for the treatment of diabetes; the study of adult human pancreatic progenitors; the development of novel techniques to image and target beta cells in vivo; and most recently, the co-transplantation of mesenchymal stem cells with islets to iduce immunological tolerance.

Dr. Lanzoni earned his MSc degree in Medical Biotechnology with full marks and honors at the University of Bologna, Italy, in 2006, and went on to earn his PhD in Stem Cell Biotechnology in 2010. He received the Ruffilli award for excellence in curriculum studiorum after completing high school, the Proni-Caravita award for his PhD studies in the field of stem cells, and more recently the Marc S. Goodman Outstanding Young Scientist award for his studies in the field of type 1 diabetes.

Dr. Lanzoni has authored almost three dozen publications in peer-reviewed journals and nine book chapters in the field of stem cells. He is an inventor of a methodology related to the transplantation of stem cells for the treatment of pancreatic diseases with a patent issued in the U.S. and in other countries throughout the world.

The Biliary Tree of Life

Under the Microscope with Giacomo Lanzoni, Ph.D.