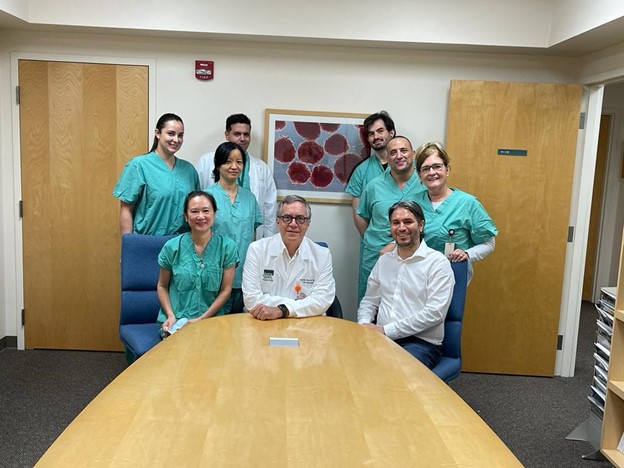 Why is developing new therapies for T1D and its complications such an important link to finding the biological cure for diabetes?

Dr. Giacomo Lanzoni is an Assistant Professor at the Diabetes Research Institute, University of Miami Miller School of Medicine. His research is focused on developing stem cell-based therapies for Type 1 Diabetes. In this disease, insulin-producing pancreatic islet beta cells are lost due to an autoimmune attack.

Mesenchymal Stem Cells (MSC) could soon become a new therapeutic agent for modulating immunity, inhibiting T1D autoimmunity, and inhibiting inflammation.
These cells stimulate tissue regeneration, and this could be highly beneficial in T1D and its complications. Furthermore, these cells could directly support the insulin release function of islet beta cell. Hence, Dr. Lanzoni`s work is aimed at regenerating and protecting beta cells. To regenerate beta cells, he is harnessing stem and progenitor cells.

In this field, he has contributed to the identification of adult progenitor cells in the human biliary tree and pancreas. Recently, Dr. Lanzoni and a team of DRI investigators have studied a newly discovered population of progenitor cells, ALK3+ ductal cells, that are present along the pancreatic ductal tree. ALK3+ cells appear to be exquisitely plastic and demonstrate a potential to mature into multiple pancreatic cell types, including insulin-producing beta cells. After transplanting these cells into mice, the cells were able to differentiate into all pancreatic lineages, and importantly into insulin-producing beta cells. This process was accelerated when the mice were treated with an ALK3 agonist (a pharmacological agent that targets ALK3). In addition, ALK3+ cells were observed in the pancreas of Type 1 Diabetic patients. When considered altogether, these findings suggest that a therapeutic strategy for beta cell regeneration could consist of a pharmacological induction for the activation and maturation of such ALK3+ progenitor cells [1].

Dr. Lanzoni also has a keen interest in the use of stem cell-derived islets for beta cell replacement [2], and he is developing novel methods for the site-specific transplantation with localized modulation of the immune system (‘immunomodulation’) [3]. To protect beta cells, he primarily employs immunomodulatory Mesenchymal Stem Cells (MSCs). With his translational research and clinical studies, he showed that human MSCs efficiently inhibit inflammatory responses and determine profound clinical improvements in patients with an hyperinflammatory state [4]. Hence, MSC have remarkable translational potential for the modulation of inflammation, for the co-transplantation with stem cell-derived beta cells, and potentially for the inhibition of T1D autoimmunity. Along this line of research, Dr. Lanzoni is collaborating with DRI`s Dr. Diana Velluto on a project entitled “LipoNano Clusters for Pancreatic Islet Transplantation.” This project aims to create localized and sustained delivery of an immunosuppressant drug in the presence of immunomodulatory mediators, leveraging nanotechnology developed by Dr. Velluto, to orchestrate tolerogenic immune responses and ultimately impart immune tolerance to the transplanted cells. Through local targeting and sustained drug delivery, this method is expected to circumvent the need for long-term systemic administration of immunosuppressants, avoiding the related harmful adverse effects [4]. Dr. Lanzoni has authored 45 publications and 9 book chapters on the topic of stem cells, regenerative medicine, and diabetes. He is an inventor in multiple patents and patent applications in this field, and he is committed to the clinical translation of his research.
The novelty of Dr. Lanzoni’s work presents exciting future implications for the treatment of Type 1 Diabetes. Stem cell-based therapies provide the opportunity of regenerating and protecting beta cell for patients with Type 1 Diabetes. From Dr. Lanzoni’s research, stem cell therapy is positioned in a place of reality to cure patients with Type 1 Diabetes.

“We have an unprecedented array of data, ranging from in vitro and in vivo models to clinical observations, that indicate a beneficial effect of UC-MSC in the context of inflammation, T1D, and diabetes complications,” shares Dr. Lanzoni. “Our team has built a substantial expertise in clinical trials of cell therapy, reaching FDA authorization all the way to Phase 3 trials. The exercise is really challenging, but there was never a more exciting time, as we are closer than ever to a cure for diabetes!”