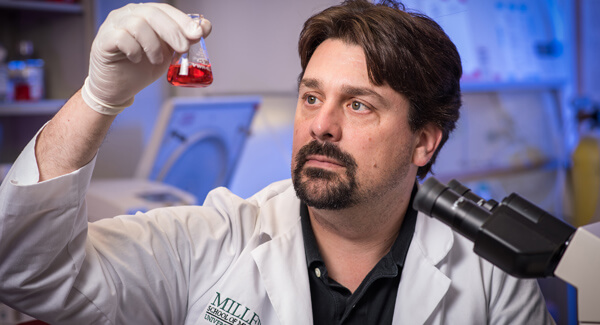 “I’m very excited about the future and seeing the progress that we’ve made in the last five years makes me very enthusiastic that we’re getting much closer.”

Chris Fraker, Ph.D., is Research Associate Professor of Surgery and Cell Transplantation and a member of the DRI’s Biomedical and Tissue Engineering team.

Dr. Fraker began his career in diabetes research building fully implantable glucose sensors. In 1997, he moved to South Florida with the goal of working in cure-based research at the Diabetes Research Institute and under the mentorship of Drs. Camillo Ricordi and the late Marcos Mares-Guia. While at the DRI, Dr. Fraker was encouraged and aided in pursuing graduate degrees in Biomedical Engineering, obtaining his doctorate in 2011.

During his tenure at the DRI, Dr. Fraker has engineered a number of devices to improve research efforts, including gas-permeable culture platforms used for stem cell and islet cell culture, oxygen-carrying nano-emulsions, and slow-release polymer discs.

Dr. Fraker is focused on optimizing islet/stem cell encapsulation to restore normal glucose levels without the need for immunosuppression. Additionally, he continues to work on improving oxygenation to encapsulated cells and applying his technologies to the growth and maintenance of mesenchymal stem cells (MSCs), islets and immune cells. The nano-emulsion technologies developed in Dr. Fraker’s lab were also licensed for development as injectable anesthetics, repurposing inhalational anesthetics into the nano-emulsions.

More recently, Dr. Fraker has begun work on the role of the innate immune system (natural killer [NK] cells) in type 1 diabetes and the importance of these cells in the viral hypothesis surrounding diabetes development. Dr. Fraker is also examining the importance of innate immune function in autoimmune pathologies and the existence of precursor cells in MSCs. He is also involved in a project examining a potential metabolic factor in both type 1 and type 2 diabetes: folic acid.

Dr. Fraker is a frequent speaker on type 1 diabetes research and his findings have been published in numerous peer-reviewed journals. He is also a recipient of several grants and awards acknowledging his significant contributions to the field.

As a patient with type 1 diabetes for more than 30 years, Dr. Fraker is committed to finding a cure as quickly as possible, exploring many avenues of research in the process. He has been at the DRI for more than 20 years and is encouraged by the rapid pace and progress of the last five years.

The New F-Word and its Diabetes Connection

The Expanding Role of Natural Killer Cells in Type 1 Diabetes

Under the Microscope with Chris Fraker, Ph.D.