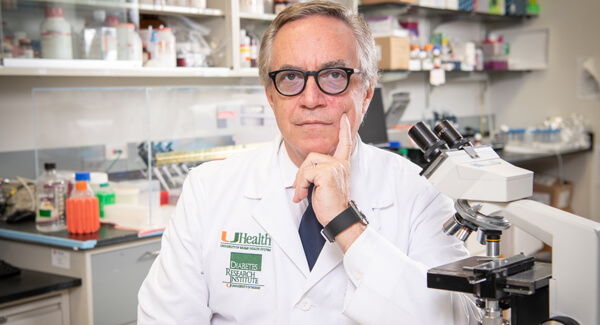 “We will cure diabetes. This is not a prediction; it is a promise.”

Camillo Ricordi, M.D., Tenured Professor and Chief of the Division of Cellular Transplantation, Department of Surgery

Camillo Ricordi, M.D. is the Stacy Joy Goodman Professor of Surgery, Distinguished Professor of Medicine, Professor of Biomedical Engineering, and Microbiology and Immunology at the University of Miami (UM), Florida, where he serves as Director of the Diabetes Research Institute (DRI) and the Cell Transplant Program. Dr. Ricordi been serving as Responsible Head of the NIH-funded cGMP (current Good Manufacturing Practices) Human Cell Processing Facility (1993-present), for the manufacturing of advanced human cell and other biologic products, for research and clinical applications at the University of Miami, in the U.S. and worldwide. Dr. Ricordi has also served as Senior Associate Dean for Research (2003-2006) and chaired the Dean’s Research Cabinet (2006-2012) at the UM Miller School of Medicine.

Dr. Ricordi completed high school with a perfect score and all graduate and post-graduate studies with the highest scores and honors in Milan, Italy.  After medical school, board certification and military service as a medical officer in the Italian air force, he moved to Washington University in St. Louis, Missouri, where he received an NIH Research Trainee Award (1986-1988) working with islet cell transplant pioneer Prof. Paul E. Lacy. Dr. Ricordi subsequently spent four years (1989-1993) with transplant pioneer, Prof. Thomas E. Starzl, as Director of Cellular Transplantation at the University of Pittsburgh Transplantation Institute. Since 1993, he has been working at the University of Miami (UM).

Acknowledged by his peers as one of the world’s leading scientists in diabetes cure-focused research and cell transplantation, Dr. Ricordi is well-known for inventing the machine that made it possible to isolate large numbers of islet cells (insulin-producing cells) from the human pancreas and for performing the first series of successful clinical islet transplants that reversed diabetes after implantation of donor purified islets into the liver of recipients with diabetes. The procedure is now used by laboratories performing clinical islet transplants worldwide and in 2017 the first NIH-funded, FDA Phase 3 multicenter trial was successfully completed by the NIH Clinical Islet Transplantation Consortium, chaired by Dr. Ricordi for over a decade. He has also developed highly innovative strategies with the objective to transplant cells and organs without the continuous requirement for anti-rejection drugs and for the reversal of autoimmune disease conditions. Dr. Ricordi’s research interests include the definition of anti-inflammatory and regenerative medicine strategies to prevent or treat chronic degenerative disease conditions and to prolong health lifespan (healthspan).

In 2015, Dr. Ricordi led the UM – UHealth – JMH team that performed the first successful transplants of a bioengineered endocrine pancreas implanted within a 3D bioactive resorbable scaffold in the abdominal cavity of a recipient with a severe form of type 1 diabetes (BioHub Project). This unprecedented success resulted in renewed enthusiasm for the possibility to engineer this transplant site with additional strategies to avoid the requirements for recipient immunosuppression, and has resulted in additional key collaborative efforts, from Harvard to Stanford and with other leading international centers. The same year, Dr. Ricordi launched the DRI Translational Fast Track Program to Reverse Autoimmunity and Induce Immune Tolerance, which he co-leads with Dr. Jay Skyler, in collaboration with several key UM investigators.

Dr. Ricordi was president of the Cell Transplant Society (1992-94), co-founder and chairman of the National Diabetes Research Coalition (Chairman 1997), co-founder and president (1999-2001) of the International Association for Pancreas and Islet Transplantation (IPITA), and a member of the council of The Transplantation Society (2002-2008).  He also served on the council of the American Society of Transplant Surgeons (2000-2002), on the National Institutes of Health (NIH-NIAID) Expert Panel on clinical approaches for tolerance induction, on the FDA Biologic Response Modifiers Advisory Committee, on the NIH/NCRR Islet Cell Resources (ICRs) Executive Committee, on the NIH-NIDDK Strategic Planning Committee and on the NIH-NIAID Expert Panel on Transplantation Research.  He is currently serving as Chairperson of the Clinical Islet Transplant Consortium (NIDDK-NIAID).  He has also been serving on several NIH study sections, including Surgery, Anesthesia and Trauma, the General Clinical Research Centers, Small Business Innovative Research, the Immune Tolerance Network, in addition to serving as a reviewer for several international funding agencies.

Dr. Ricordi has received numerous honors and awards, including the 2001 Nessim Habif World Prize in Surgery (University of Geneva) for developing a technology that significantly contributed to the advancement of a surgical field.  He was awarded the Outstanding Scientific Achievement Award by the American Diabetes Association (2002). He delivered the opening plenary (Galileo Lecture) at the European Association for the Study of Diabetes (EASD) Congress in Rome (2008).  In 2009, Dr. Ricordi was Knighted by the President of the Republic of Italy in the highest Order of the Republic (the Order of Merit) with the Knighthood decoration of Cavaliere Ufficiale and in 2010 he was only surgeon and one of the few ever inducted into the Association of American Physicians (AAP). In 2011, Dr. Ricordi received the D-Life’s Top Award for making the biggest difference in diabetes in 2010 (international web-based public vote competition). In 2018, Dr. Ricordi was inducted in the National Academy of Inventors contributing outstanding inventions that have made a tangible impact on quality of life, economic development, and welfare of society. Dr. Ricordi was recently ranked (2018) as the top-ranked expert in islet transplantation in the world. In 2019, Dr. Ricordi was appointed by the Italian Minister of Health to the Supreme Council of Health.

Dr. Ricordi also serves as Chairman of the Board of ISMETT (Mediterranean Institute of Transplantation and Advanced Therapies, and was appointed President of Fondazione Ri.MED by the Italian Prime Minister for the 2013-2017 term.

Dr. Ricordi was founding president of the Fondazione Cure Alliance ONLUS and of The Cure Alliance and Chairman of the Diabetes Research Institute Federation, coordinating and promoting cure-focused research at over 24 leading institutions worldwide, while further developing Telescience platform technologies to eliminate geographic barriers to scientific collaboration. These initiatives now allow scientists and project teams from around the world to synergize efforts and work together as if they are in the same physical space.

Transplanting islets can fix brittle diabetes. Why isn’t it available in the U.S.?